I have long been a fan of the work of Etgar Keret. His short story collections are funny and charming and I tend to carry them around with me for months, pulling them out and reading one or two stories whenever I have some down time. His latest collection, Suddenly a Knock on the Door, is typical of him: his stories so often contain very little set-up or exposition. We are immediately pulled into the action by a phone call, knock on the door, question from a child, or some other reminder of daily life. 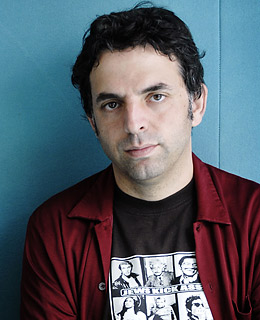 What struck me about Etgar Keret this time is his perfect blend of self-deprecation, humour, and vulnerability. He says that he'd "rather have [his readers] hate him than feel neutral" about him, though he isn't one for blustery comments such as this usually. He talked about Israel, about growing up with two parents (Holocaust survivors) who each spoke five or six languages but worked hard to only speak Hebrew to the young Etgar. A natural story teller, in the space of an hour, Keret managed to work in at least three stories in his attempt to explain the hows and whys of his approach to storytelling.

If you are a fan of Keret or haven't read him at all, I highly recommend doing so: he is as modern and wry as David Sedaris, and funny as Woody Allen, and as focused as Lydia Davis.

He's been to Blue Met before but we may just have to send him another invitation if he keeps cranking out these lovely story collections.
Posted by Gregory McCormick at 9/14/2012 06:34:00 PM