So we're off to NYC for several days next weekend and, as I am often wont to do before I travel to New York (or just about anywhere, in fact), I want to read fiction set there. I picked up this excellent edition (with an introduction by 2013 Blue Met Grand Prize winner, Colm Tóibín, no less!) of The New York Stories of Henry James. It's been slow-going. 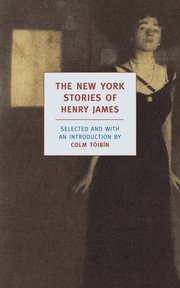 I'm a fan of Henry James but, first, it's hard to read such dense and heavy text on a hot summer day when people are riding by my balcony on bicycles and dogs are barking in the sunshine. It feels too weighty, requires too much concentration. I read the first three stories with some effort but after finishing the third one, I just couldn't bring myself to continue. At least not for now.

Why does Henry James feel like a cold autumn afternoon writer? Or a stay-in-bed-and-drink-hot-chocolate-while-it-snows writer?

The other reason I couldn't make it work this week is that though the stories are all connected to (not all set there) New York, Henry James is not the kind of writer that revels in space. No long passages about taking the train or sitting in a park people-watching (or at least not in the three stories I read). You get no sense of life in New York (not "common life" at any rate) from reading the stories. Henry James' interests lie inside: in the psychology of human interactions, motivations, fears, secrets. That's fine but because of that fact, I think, the "New York" side of this collection feel rather arbitrary and Tóibín's contextualizing James within the New York of his day is about the only time in the collection where New York really features as part of the stories.

I should dig out my old copy of Theodore Dreiser's Sister Carrie, a real New York kind of novel...