I have deep personal connections to Japan in several important areas of my life (which explains in part my interest in Japanese literature) and so we`ve been glued to the news the last few days. One feels so helpless here but luckily it seems everyone we know is safe and accounted for. It`s easy, though, to get overwhelmed with the tragedy and it`s become a familiar tragedy given all the earthquakes the last 15 months.

It makes me think about literature that is set during or after an earthquake. Earthquakes, shockingly real and intensely physical to anyone who has experienced one first hand, offer far too many metaphors for the human experience. Charles Darwin famously said after experiencing an earthquake in Chile in 1835, "A bad earthquake at once destroys our oldest associations: the earth, the very emblem of solidity, has moved beneath our feet like a thin crust over a fluid." And when the world suddenly shifts underneath you, all of your assumptions seem equally tenuous.

Most famously is Harumi Murakami`s collection of short stories "After the Earthquake" which is set in 1995, after the Kobe quake and before the sarin gas attack on the Tokyo subway system. I read this collection several years ago but perhaps it's time to hunt down another copy of it. Murakami, as is to be expected, is not interested in the actual experience of earthquake as much as he is in the emotional threads and the way in which earthquake changes a society. As we know, fear is a dangerous element in any society: but what happens when our fear is a fear of the very earth on which we stand?

It's natural that countries which experience earthquakes also explore the issues of earthquake in their literature: Iran, Chile and, of course, Japan. Some ancient Persian poems address the terror that is earthquake and are an important part of Iranian literature.

Pablo Neruda, too, in his fascinating collection Canto general (a natural and collective history of Latin America) addresses the emotional metaphor that earthquake allows in a poetic sense in a poem called "Earthquake," which has an immediacy that is also part of experiencing a real earthquake. The poem ends on a positive note, a new day's sun coming up. I guess that's all one can do when they are situated in the thick of it. Thoughts and prayers to everyone in Japan.

I awoke when the ground of dreams gave way
beneath my bed.
A blind column of ash was staggering in the middle
of the night,
I ask you: have I died?
Give me your hand in this rupture of the planet
while the wound of the bruised sky makes stars.
Aye!, but memories, where are they?, where are they?
Why does the earth boil, filling with death?
Oh, masks under curled dwellings, smiles
that fright had not yet reached, beings torn
under the beams, covered by the night.

And today you dawn, oh blue day, dressed
for a dance with your golden queue
on the subdued sea of debris, fiery,
looking for the lst faces of the unburied ones. 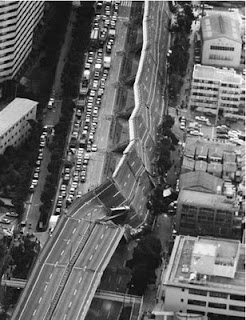