Jaime Manrique - Our Lives are the Rivers 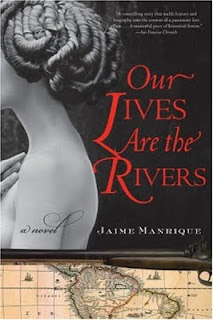 The novel tells the story of Manuela Saenz, the mistress and lover of Simon Bolivar. Bolivar is one of the most interesting historical figures and he was a complicated man who life was punctuated by loss: by the time he was 20, he'd lost his mother, his father, and his wife yet he still was able to maintain (later in his life) a passionate affair with Saenz, a woman who was both his saviour and his doom.

The book isn't great but it's good, a fast-paced story which isn't easy when tracing the arc of a character's life. The passion is a bit overwrought in places and I don't quite buy Saenz's absolute devotion to Bolivar or to his cause, but there is a sense of true entitlement that she has which feels genuine, particularly in her complex relationship with her slaves.

Also makes me wish I could get my hand on a good biography of Bolivar: there are a number of them out there.