Guernica Editions has released a new book recently of poems by Chava Rosenfarb, Exile at Last, which I've been revelling in the last few days. Rosenfarb emigrated to Montreal after surviving several camps during WWII (Auschwitz, Bergen-Belsen, among others) with a collection of poems she'd already composed in order to remember her suffering and the suffering of those around her.

But she saw the possibility in her adopted land and it was here in Montreal where she was able to turn this small collection of poems written in the dark into something tangible. I have to admit that I am not a big fan of Holocaust Literature as a rule: it's too focused on one experience, one reality, and it's work which often doesn't speak to people when it's too myopically focused on a unique and unusual circumstance.

I also think of Czeslaw Milosz who said he refused to write about the horrors he survived (though he was never in a death camp, he did live through the bombing of Warsaw and most of friends and acquaintances being wiped out) because he never wanted to be a "professional mourner."

But I find that Rosenfarb's little book, edited by Gordie Morgentaler, translated by Rosenfarb herself, puts a spin on life in Montreal and gives voice to this unique kind of experience. For me, the Holocaust has always seemed so far away, a different continent, so long ago. But Rosenfarb somehow brings it closer, sees Montreal through the eyes of someone who survived, gives the duality we all live with here much more complexity. She says:

...I do not feel at home in this country. Here, in Montreal, in the Province of Quebec, I have lived for two decades between the two solitudes - in my own solitude. My alienation is due to natural causes, if I may call them that, and is incurable. It is due to my being both a writer and a Jew of the Diaspora, the eternally restless, eternally wandering Jew. This share of my alienation I accept and recognize as part and parcel of my identity. This part of my alienation is stimulating. It is at the very core of my creativity. 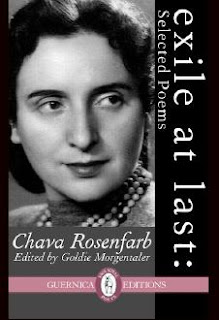 Though I am not a Jew, though I have not survived horrors as Rosenfarb and so many others have, I can relate to these words in important ways being, both an alien here and being eternally restless myself, but I also recognize that this sense of alienation is one of the things I like best about living here.

Rosenfarb's poems, most of which were written in Yiddish, are dated,often religious, and exist as small testaments to the limitations of translation, I fear. I don't speak Yiddish but I have done some translation and seen that some poems just don't work in English. Only some stand this way, some others are deceptively simple...

Some of the poems rattle with an emotional core that shake them but don't break them apart. While reading, I am often reminded of Nancy Richler's excellent novel, The Imposter Bride, whose protagonist similarly survived the Holocaust and ended up here, restless and damaged. But the experience must have been relatively common in the Jewish community here mid-20th century and I suppose many survivors could relate to it:

So she had gone,
forgetting to cry,
without saying goodbye,
even to the dog.
Without letting here eyes embrace
the walls between which she had paced,
without touching the things she was leaving behind,
things cherished for years.
Without kissing him whom she had loved
even in her mind.
She locked the door to her past,
An exile at last.

I don't read these poems for the poetry but for the sense they give me of the abundance of life in Montreal, of our history, of the countless voices who have come as survivors and left their mark on the streets we walk on every day.
Posted by Gregory McCormick at 3/20/2013 08:00:00 AM