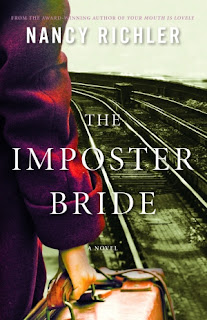 Nancy Richler's book, The Imposter Bride, got some great buzz going when it was nominated for the Giller Prize back in the fall. In all honesty, I had the book sitting on my bookshelf for months and didn't pick it up until well after her nomination and I have to say that I enjoyed it. I passed it around to some friends who all read it and raved about it. It's been a long time since a book by a Montreal was so well-received by boots-on-the-ground Montreal readers.

Here is a brief article I wrote on the book back in the fall.

Nancy Richler has two events at the Festival: one is a staged reading of her book produced by the Montreal Review of Books. This event is on Saturday, April 27 at 9pm. It'll be a great opportunity to meet Nancy and see a scene from her book performed by actors. $10

The other event is an event that is likely going to sell out. It's on Saturday afternoon at 1pm  and is called Mothers Who Leave, a round table with Shelley Pomerance (the host), Colm Toibin, Nancy, and Arnon Grunberg. $10