Based on the travels of Lewis & Clark, the first one in the series hints at supernatural beings and creatures that lived out in the wild west, creatures that Lewis & Clark secretly described and notated in a classified journal only for the eyes of Jefferson.

There's also intrigue and "bad guys" that have infiltrated the Louis & Clark group.

I look forward to seeing how this one develops. 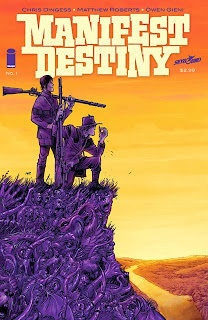