You know how you get kind of obsessed with a writer and try to read as much as you can in one fell swoop?

Lately, for me that writer has been Sam Shepard.

I've read him before and in the spring, I had some very interesting conversations with fans of his work that I met at a few work functions. Over the summer, I picked up a play here, a collection of stories there until I had quite a nice collection which I started reading through in the last couple of months.

I am just blown away. Funny how when you read something in your early 20s, things can just fly by you. Something about re-reading him now in my early 40s has opened up a whole new world for me. The distances between us all, the ways we disconnect, the ways we try to reach out, the pain of isolation.

Also, since I am originally from the Western US, perhaps his setting felt too close to me when I first approached Shepard years ago. Now that time and distance fall in between, the west is almost exotic, like a song that's vaguely familiar but whose melody and words I've long forgotten.

His collection Great Dream of Heaven is one of those books I intentionally have been reading bit by bit because I don't want it to end. Some of the pieces are short, some just two pages, none more than 10, but they are incredibly self-contained with complex snippets of characters that stay with you for days afterwards. 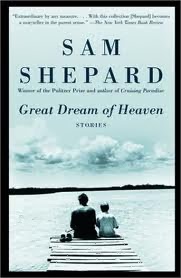 It strikes me, too, that his writing has fallen out of fashion in certain ways because we no longer find it fashionable to explore issues of class in our art. Or at least not in the dominant culture. And it's not done in any overtly political way: but his stories contains lives of those on the margins, living hand to mouth in small towns and cities in the west.

The premise he starts with is often simple: a woman driving through the midwest with her mother's ashes in an urn in the passenger seat, encountering an injured hawk along the highway. A conversation between a woman being evicted for having too many cats and someone trying to help her. A young boy interviewing his father about the 1980s for a school project. A customer in a fast-food restaurant inquiring about the simple yet complex philosophy behind a painted sign at the counter.

Yet despite the simple settings and lives, he richly creates these complex series of thoughts, never pretentiously, somehow putting on the page things we've all felt or thought or pondered.