OK so I should have written about Edinburgh already but it turned out to be one of those trips where I was running from morning until night, seeing events, meeting writers and other festival directors, and attending receptions. Not complaining! It was a blast. But the thick of it is that I have not had 30 minutes to add anything about the trip.

Edinburgh is an amazing city. It feels much smaller than Montreal. Heavy with lots of stone buildings everywhere. No trees! And lots of concrete. But the vibe was really something else: it's so clear that the people there are crazy about the arts: everywhere there were lines of people waiting to see something: a comedy show, a play, a concert and, yes, a writer or round-table.

For those unfamiliar, the Edinburgh Book Fest is one of the world's biggest book festivals (if not the biggest though it's not a book fair like Frankfurt or Guadalajara). But it's the collection of festivals which really gets people out and into Edinburgh: the Fringe Fest, the International Festival, and several other very popular and booming festivals going on in August. 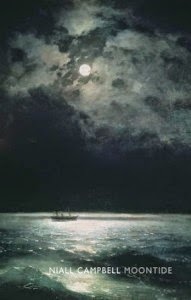 I saw this awards ceremony for the Edwin Morgan poetry prize and once the winner read, I knew he'd be the winner. His work is so moving, full of images of the sea and his rural upbringing as a fisherman's son on islands off the coast of Scotland. Yet laden with intellectual rigour and a broad-ranging sampling of philosophy, literature and history. His first collection is called Moontide and it's a meditative read, one you linger over, recapturing images and phrases that are jarring but moving once you think about them for a while.

The evening was hosted by Jackie Kay, a writer whose work I have long admired. The other nominees included Claire Askew, Tom Chivers, Harry Giles (who gave a magnificent reading that blew the entire room away), Stewart Sanderson and Molly Vogel.

And so on that, I'll end this post with a poem from Niall in an older issue of Granta:

The last tenant of our newest house,
had the gas boiler fire up in the late hours.
And so, last night, so cold, I listened to
the floorboards warp in the unwelcome heat.

I barely slept. The thought of him stretched out
beside us, hot as a hand that gives the slap.
Since then the water tenses in the pipe,
as his darkness changes to my dark.

What I love about poems like this is their seeming mundane aspects: there is nothing "poetic" here at all and it's really a matter of the poet's sensibility and sensitivity in finding poetry in these day to day experiences (another poet I admire, Wislawa Szymborska, was a master of this, too). I love the odd rhythms, the unclear phrasing that makes one stop and consider carefully: the man stretched out ("beside us"?) as "hot as a hand that gives the slap" which I find to be such a carefully crafted line. And that final line which perplexes me more than anything (in a good way: it makes me read and re-read until I get closer at some kind of meaning).

Though not all the poems are as mundane in their settings or action as the one above, they all have this sense of careful craft and deliberate language that is at once illuminating and mystifying.
Posted by Gregory McCormick at 8/21/2014 03:19:00 PM