Blue Met's A Year in Reading: from Ferrante to Adelstein, Luiselli to Benedetti

Since everyone else seems to be doing it, I thought I'd weigh in on my personal favorites for 2014:

Best 2014 comfort reader: Eileen Chang's Half a Lifelong Romance: I've long been a fan of Eileen Chang, but this novel, which dates from the middle part of Eileen Chang's career, was a new one for me. It appeared in serial form in the 1950s but is set in 1930s Shanghai and tells the story of a doomed love affair in the tumultuous period leading up to the Chinese Civil War. It's a tale of a young woman trying hard to live life according to her own terms in a society where women are diminished and dismissed. It's not a perfect novel but it's engaging a fascinating tale of power, love and fate.

Best  2014 binge-read: Elena Ferrante's Neopolitan novels: in 2014 I read the first three books in a few months and was absolutely riveted by them. They tell the story of a friendship (sometimes enemy-ship) of two girls growing up in 1950s Naples (the first book starts then, the third book ends in the late 70s) while one girl manages to pull herself out of the neighborhood through study and hard work, the other relies on pluck and street smarts. It's the story of an Italy that's long gone, but also romantic & violent.

Best 2014 discovery: the work of Valeria Luiselli. One of Mexico's most promising up and coming Faces in the Crowd is still with me months after I read it. It is a fascinating novel that looks at time, art, writing and fate/choice. This is a writer who I will be watching for years to come because everything she's written so far is interesting.

Best 2014 shocker: A True Novel by Minae Mizumura: this novel is a retelling of Wuthering Heights set in post-war Japan. But that really diminishes the book in a certain way because it's only a tiny fraction of what's interesting about this book: it's fascinating formally and one keeps asking oneself throughout the book: is this the novel or the story on which the novel is based? Is this real? Then one wonders what real actually means: is anything real? But I'm making the book sound pedantic or possibly boring. It's anything but. It's an excellent novel that I highly recommend. 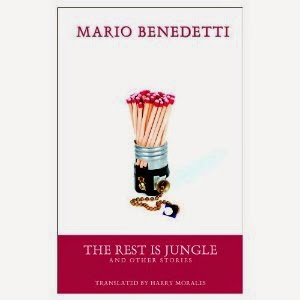 Best 2014 Guilty Pleasure (and best 2014 book by a man?!): The Rest of Jungle & Other Stories by Mario Benedetti: I loved this book. It's a collection of stories by a Uruguayan writer whose work is hard to pin down: it's about middle class love affairs, about jungle adventures in the bush, it's about office workers stuck in bureaucratic hell, it's about animals who are bitchy and judgmental.

Best 2014 non-fiction journalism: Tokyo Vice: an American Reporter on the Police Beat by Jake Adelstein: Adelstein is one of the only foreign reporters ever hired by a Japanese newspaper and he tells the tale of his work for one of Tokyo's biggest daily newspapers, including his involvement in writing stories about Yakuza and other sordid Japanese adventures.