Trotsky is a figure who fascinates and has for a long time. There are movies about him (including one that alludes to him consistently since Jay Baruchel's character believes he is Trotsky reincarnated). And many many books. I was in a bookshop the other day and this biography of Trotsky called out to me so since I was in between books, I nicked it off the shelf and started reading it on the metro that afternoon.

As biographies go, it's OK. It's hard work as a biographer, particularly of someone like Trotsky, when so much of his life and career were wrapped up in causes that today seem obscure and rather pointless. I'm not saying they were pointless, but that they seem pointless in their minutiae: how many details, for example, do we need about all these long ago dead parties that wanted to change the world, parties that even at the time the vast majority of people didn't even know or care much about. 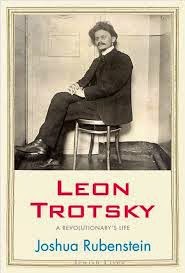 (One thing occurred to me as I read this, though: we often hear about this segmented society we live in today where we all get our news or read the feeds from points of view that we largely agree with. So conservatives watch Fox or Sun news and liberals watch MSNB or read Bill Moyers Twitter feed, etc. so we only hear opinions that reflect a point of view we already accept. And that this is a bad thing. But back when newspapers were king, particularly in the early part of the 20th century, newspapers often had very myopic views and biases and they fed into these large social movements. So there were left-wing radical workers newspapers and traditional papers that maintained the status quo and what paper you read determined your political outlook and makeup, etc. (or vice versa which was probably more likely the case).

This occurred to me reading this biography of Trotsky because he wrote a lot and if Trotsky is remembered today for one thing, it's the fact that he was a real writer, not just an agitator or political upstart who wrote on the side. And the papers and journals and reviews he wrote for all had very specific political leanings and points of view: even literary journals championed certain writers who championed certain causes. None of these were "mainstream" (at least not in the way we understand that term today) but there were countless ways to get news from all levels of society.

When we hear about the death of journalism or how journalism has changed so much that it's hardly recognizable, we forget that journalism, really, is a very new kind of art and even 70 years ago was radically different than it is today (or, indeed, than it was in the 70s which is often considered the "height" of journalism). Ideas of free speech are radically new but the powerful influencing how the message is distributed and/or shaped are not new at all.

Who knows how journalism will continue to change and evolve as society (and technology) changes and evolves.)

Back to Trotsky: he was a champion of causes that many would find admirable today: he really did 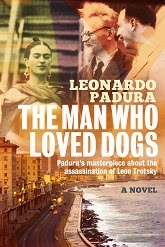 seem to want to fight for the rights of the poor, the downtrodden, those without any rights. At least early in his career. (Later, things became more complicated).

But to me, the most fascinating part of Trosky's life is his final years in Mexico City before an assassin cut him down. It's an amazing story that, again, has been told and retold so often that fact is not longer that distinct from myth. But despite this being an adequate biography, fiction often seems a more interesting way into a larger than life figure's life story. I'm thinking about (Blue Met 2012 author) Leonardo Padura's book The Man Who Loved Dogs which chronicles the final years of Trotsky's life in Mexico (as be befriends artists like Frida Kahlo and Diego Rivera) and other political revolutionaries. It's an excellent novel and I think I'd re-read that before I read another dry biography about his life.
Posted by Gregory McCormick at 12/02/2014 07:41:00 AM