Saw this Chilean film, El Club, and wow. One of those films that you find your heart racing and you're on the edge of your seat. It's not suspenseful. The violence is fairly muted (hardly a horror film) but yet after it, I felt worn out and kept asking myself: What the hell just happened?!

The film centers on a house in a remote village along the coast of Chile where five priests live with a nun. Early on, it becomes clear that the priests are there as a form of punishment/exile, some have been there for decades, and as the story unfolds we learn about their shocking, appalling crimes. 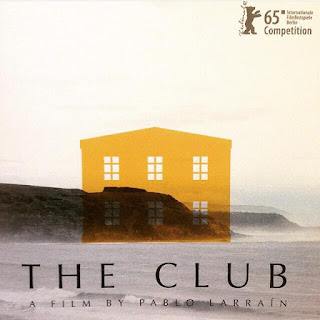 The final 20 minutes of this film are some of the most riveting and electric minutes I've ever seen in any film. Though the story itself is rather tepid, bleak, depressing even (not a good film to see on a dreary winter day as I did), the psychological drama that beats at the core of this is absolutely thrilling.

Don't see this if you're feeling sad or low or sick of bleak winters. Do see it if you love good and complex film.

Pablo Larrain, the film's director, also did the film 2012 No with Gael García Bernal but wow what a different energy he brings to this one.