Though he was at the Festival a few years ago, I came across Iosi Havilio's novel (translated into English in 2011), Open Door, which is such an excellent read.

The book is set in Argentina and gives us a glimpse into an unnamed narrator who returns home after a jaunt out in a northern village to visit a sick horse (she's a veterinary assistant), meets up with her girlfriend who suddenly disappears. The women are clearly having problems but when Aída goes into a shop in La Boca to buy cigarettes and never comes back out, a mystery of sorts opens up. In the short time after Aída goes into the shop, a person (maybe a man, maybe a woman) is on a bridge high above, surrounded by police and others trying to talk him or her down. A crowd gathers to watch and goad and click their tongues and when it seems that the person is, in fact, being talked down, suddenly the individual jumps and falls to a presumable death in the water. The central question is: was this Aída or not?

To call this book a thriller would be wildly misleading and, in fact, the best part of the book is the muted emotional response of the protagonist who goes on with life with almost no emotional reaction. She loses her job, and then without any explanation, returns to the village up north where she'd been visiting the sick horse the week before. There she falls in with an older man named Jaime and she becomes obsessed with a local teenaged girl who lives in the village. 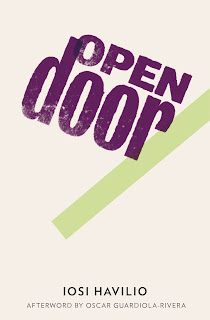 It's such an austere story in many ways, mainly due to the lack of any kind of emotional response from the protagonist: she never reflects back on her life, her past, we know little to nothing about her childhood, her parents. All she does is push through life with no particular impulse driving her except sex (and even that is relatively infrequent). Occasionally, a phone call will come in from Buenos Aires, asking her to return to identify a body that's washed up but our heroine constantly ends up shaking her head. Where is Aída?

Sometimes a writer will come to the Festival and though I try to read as many Festival books as I can (I did read this 2-3 years ago), I will read it quickly without really revelling in it. Mainly that kind of reading is "trying to get a sense" of the book so that I know how to use the author. But it's in the months or years after the Festival that I will have time to read for the story, to revel in the language, to enjoy it.
Posted by Gregory McCormick at 3/08/2016 07:18:00 AM