Thursday night (tomorrow, the 8th of November) at the new Goethe Institute in Montreal (St-Laurent and Ontario, just a block north of St-Laurent metro station) there will be a screening of a German television series that caused quite a sensation when it was screened in Germany as part of the Berlin Film Festival a couple of years ago. The series is comprised of 10 episodes and entitled In the Face of Crime (Im Angesicht des Verbrechens). Many critics called it a masterpiece though the director's name, Dominik Graf, isn't widely known outside of Germany. According to several articles and critics' responses (including this one here) that's largely because Graf writes for television which naturally has a much smaller international audience and often falls off the circuit for international film festival screenings.

But let's not forget that even cinematic geniuses like Kieslowski started on television (if you haven't seen his 10 episode series, The Decalogue, made for Polish television in the 1980s, you are missing out!) and today the talk around the water cooler is much more often around television than it is about movies. (I'm always amazed at how much of my conversations with friends relates to TV when almost none of us actually watch television shows on TV but instead on DVD or Netflix or iTunes or the PC: talking about Breaking Bad,  Downton Abbey, The Big C, Weeds, Treme, The Wire, etc., etc.). 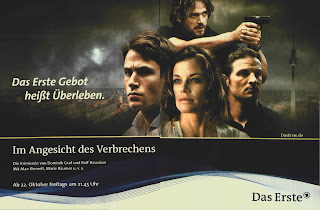 As I noted earlier this week, it used to be that television was looked down upon and I remember when I was an undergraduate, there were no television shows that were considered even halfway decent for polite society! Nowadays television is, by and large, much more interesting and engaging than big American movies.

Be all that as it may, In the Face of Crime, the German series, shows the lives and work of two Berlin police officers as they navigate the German underworld, spotlighting Russian gangs, sex trafficking and other issues major urban centres around the world are forced to deal with today. I've not seen it but definitely going to go check it out.

It plays Thursday and Friday nights at the Goethe Institute in downtown Montreal. It's $3 to get in (free to friends of the Instiute) and each episode is about one hour long (so two episodes per evening). The screening is in German with English subtitles. Bring some friends. Might be a new show to discuss around the water cooler!
Posted by Gregory McCormick at 11/07/2012 01:36:00 PM