First there's Nancy Richler, whose Giller-nominated novel, The Imposter Bride, from earlier this year I've been reading this week. It's an engaging story about surviving trauma and learning to forgive the past. When a young woman arrives in Montreal just after the war, it's clear to everyone around her that she has come out of something horrific. What struck me about these passages is how much the characters keep to themselves. I think today we have more impulse to share what we are feeling and thinking in order to help those around understand why we do (or don't do) the things we do.

But this mid-20th century family still guards their thoughts and feelings preciously and, as a result, the novel's plot moves forward. It veers towards the overly poetic at times (the sending of stones to Ruth every year on her birthday seems like a highly novelistic flourish) but it's a story which reminds us of the individual horrors that WWII brought to so many lives. Mothers who leave, secret traumas from the past, starting a new life and a new identity and the things we can't leave behind: all these themes are explored by the writer but in the end, we are left with a story that is hard to put down, hard to forget. Certain images have stayed with me for days and the shifting points of view created an important effect in that we never sense that feeling of claustrophobia we might have if we were only in Lily's head.

Though the book was nominated for the Giller, it didn't get as much buzz as it might have which is surprising since it's such a powerful story. She's a new writer to me but I am excited about having the chance to read her earlier work.

The other writer I've been thinking about is Argentine Luisa Valenzuela. She's getting on now in years but I find her work so unique and thoughtful. Though she might be called a "difficult" writer (see yesterday's post) her almost stream-of-consciousness narration is highly disciplined and very tightly woven into the fabric of history, particularly the recent history of Argentina. 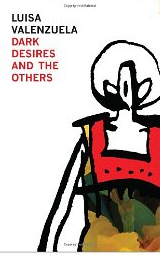 She breathes in huge gulps of her city's air, the verb a lie at the time, because the air had become unbreathable. With vandal-like delight she is disemboweling her library. Some books will have to disappear - the word alone produces goosebumps - others are simply dismantled in order to preserve this story or that essay or those three chapters that she knows she'll need for her course, or that she wants to keep with her in spite of the weight limit on planes. Get rid of everything to be able to leave as lightly as possible. She knows that if she stays in her own country, she won't write anymore. She can't show her latest work to anyone. She's afraid of putting those readers in danger (from "Getting Ready to Jump," in the collection Dark Desires and the Others).

What strikes me about this passage is how openly she references the politics in one way but how cloaked her allusions are in another way. Valenzuela has said that she avoids writing about "the message" of politics and this to me seems like a fair way to approach this topic. (It also reminds me of a Slate article over the weekend on the work of Barbara Kingsolver. Is the writer - either Kingsolver herself or Michelle Dean the Slate writer - confusing the issue with the message?) Otherwise, writing (or any art) becomes dated very quickly.

Valenzuela's work is fascinating and a writer I'd love to see in person sometime.

A great interview with Luisa Valenzuela here from the Paris Review Writers Series.