A bit swamped in literary prize season this year: QWF, GGs, Giller, Cundill, and now the Charles Taylor announces their long list. The last couple of weeks it's been all about non-fiction. Though I try to read as much as I can, I have to admit that I read less non-fiction than novels or graphic novels. That said, I have read some books noted in some of the latest long or short lists. A few highlights:

Epistolophilia: Writing the Life of Ona Šimaite by Julija Šukys. This one has been nominated for a few awards and I am really happy to see it on the CT list this year. The book is haunting, told with grace and skill, and is interesting formally: it's part biography, part memoir, part historical document. The core of it, though, is the life story of this fascinating woman who helped save many Jews during the Holocaust but ended up dying impoverished in a Paris apartment, nearly completely forgotten. By re-reading and reflecting on her letter, Šukys gives voice to an important individual, a lover of books, a multi-lingual and opinionated woman.

The Pursuit of Perfection: A Life of Celia Franca by Carol Bishop-Gwyn. This book has received a good deal of attention since its publication (also nominated for several awards) and tells the story of the founder of the National Ballet of Canada. Franca had an extraordinary life and reading about it only underscores the influence she had on the Canadian arts.

Actually there are several other books of note there: Noah Richler's, the book on P.K. Page, and Ross King's book, Leonardo and the Last Supper. 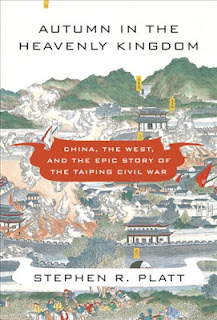 I know from talking to some of the people there that the Charles Taylor jurors get well over 130 books each year to choose from and it's certainly not easy to sort through so many in order to come up with that list.

On a semi-related non-fiction note, I was at the Cundill Prize ceremony the other night and saw Stephen Platt win for his book Autumn in the Heavenly Kingdom, a book which traces the history of the Taiping Rebellion in the middle of the 19th century in China, a rebellion which (even conservative estimates suggest) killed 20 million people and late had a major influence on the fall of the Qing Dynasty and the subsequent years of civil war (and, one could argue, the founding and establishment of the Chinese Communist Party). I thought for sure Stephen Pinker would win for his book on violence, The Better Angels of our Nature (he's a Montreal boy, after all), but was also happy to see a book on Chinese history being so widely recognized.
Posted by Gregory McCormick at 12/06/2012 08:01:00 AM