John Cheever. The Past. Seinfeld.

I came across this book the other day in a bookstore downtown and it brought back happy memories. 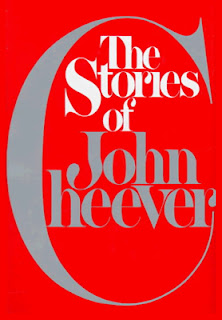 I've owned this edition at least twice in my life, one as an undergraduate where I read each story slowly and methodically, almost as if I could break them apart to understand how Cheever's stories worked. His narrators are cool observers, part of the action but also one stepped removed from the emotional core of the plot. Lots of family relationships, suburban New York landscapes, angry conversations. And lots and lots of drinking. Anyone who wants to be a writer should spend time encountering these stories as a young person, I think.

Years later, I came across the same edition of this collection in Asia somewhere. I recall one winter in my 7th floor apartment, staying in bed for a weekend (it was unusually cold and the heating systems don't work that well in Shanghai), re-reading this book again and experiencing the stories as an older reader. They hadn't lost their charm.

This was China in the very late 90s where books were not always easy to get, so good ones tended to make the rounds (along with DVDs and CDs): a friend borrowed this Cheever collection and on more than a few occasions we sat with beers in a bar and discussed various stories in it. Then the book travelled around our little circle of friends. I remember finding it odd that men connected to the stories more often than women (a woman I remember complained that the stories were about old white drunk men who would be the same age and generation as her father).

I didn't buy the book that I saw downtown the other day (I have no idea what happened to the two earlier editions of it I have owned, I suspect I loaned them to someone and they vanished into someone else's life). I didn't buy it because this time of year I simply have too much that I have to read for work and I don't need more distractions. But also, part of me likes the fact that the stories represent a time from my past(s), that the memories I have of them are associated with a very specific part of my history and for now at least I don't want to interfere with that. It's like coming across an album you used to like from high-school or college: you can still appreciate it but that music represents a different time and place.

You don't hear terribly much about John Cheever these days. I vaguely remember references to him on Seinfeld (he had exchanged love letters with George's uncle, I think...?) and I know that the Library of America did a great edition of his works a few years back.
Posted by Gregory McCormick at 12/20/2012 08:57:00 AM