A few years back, Argentine director, Juan Campanella, won an Oscar for his Spanish-language film El secretro de sus ojos. The film is an interesting one: it's both a thriller and a story of history, that of the use and abuse of power before, during, and just after the Dirty War in Argentina. But it's most importantly a love story. 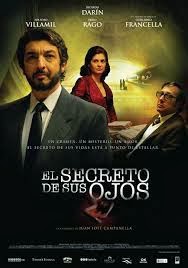 On stage yesterday, the director talked about this film and his career and what it meant for him to come back to Argentina (after directing some very popular TV shows in the USA like House and Law & Order), about how he managed to finance the film, about his earlier work, about film school in Argentina, about the film industry of Latin America and many other related topics.

The bit that had the entire 500+ member audience (in an amazing old colonial-era theatre, Teatro Adolfo Mejia) on the edge of their seats was his blow by blow analysis of a very famous shot from the film El secreto de sus ojos (written about here) that is over five minutes in a continuous panning shot that is quite remarkable in its conception and production. The director walked through each section of the shot, talking about the shooting, the mixing, the visual effects, the use of extras. Man, you could have heard a pin drop in that theatre, people were so riveted.

I love literary Festivals that don't stick only to "literature" and there are so many interesting conversations to
be had which only relate indirectly to literature. And I love this about our Montreal public: that they are willing to go with the flow often when we try our hand at non-literary themed events.

Stay tuned to 2014 to see a few events that aren't directly related to literature...

Though we're at the Hotel 10 again this year, I like the idea of branching out and using a neighborhood as our venue: Old Montreal, for example, or St-Henri. Seeing events in big theatres like I've been doing here has a totally different kind of energy to them. We like our model of presenting events now, but we're always thinking of ways to make it more interesting. Who knows what the future holds...