A True Novel by Minae Mizumura

Once in a while I read a book which knocks my socks off. Lately, it's been A True Novel by Minae Mizumura. The novel is a "re-telling" of Wuthering Heights but set in Japan in the 1950s just after the war. It's absolutely fantastic.

First off, it's highly readable. The characters are complex and intriguing, particularly the main character (the "Heathcliff" of the novel), Taro Azuma. But more than this, what Mizumura does with the novel form is fascinating: the book has a very long (150 pages +) preface where she tells the "real" story of how she came to write the novel and which people she met in her life helped her see a way in to approaching this story. She writes about inspiration and creativity, about growing up in New York with echoes from the original novel (as though life itself were a kind of novel but only in the retelling of life itself). But the preface is, in many ways, as important as the novel itself. It sets up so many expectations and helps us navigate certain plot points in the retelling part. I kept returning to the original Wuthering Heights while reading it, wondering how Emily Bronte's novel would have opened up if she had added this long "true" part before the novel. 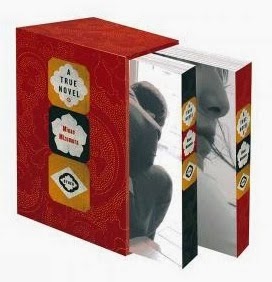 The book has layers of tellings: the author tells us about her telling before she even tells it. Then some young man she meets in her real life becomes the basis of the main character who starts telling the story of the novel (Is he real? Is he fictional? Is he both?) but the bulk of the novel, as in Bronte's version, is told from the point of view of a housekeeper who witnesses the doomed love affair as an insider.

What I love about books that are retellings is when they open up the original and change it in a certain way for me, when I view that earlier work differently because of the retelling. The novel, like the original, looks at class but in very different ways that Bronte's novel. Mizumura is also interested in gender, in the war, in how the different generations approached love and violence. She explores the vastly different Japanese economy, what Japan was like when it was still a poor country.

At any rate, the book is nearly 1,000 pages long (but packaged beautifully in two separate volumes so they are easy to lug around) but I zipped through it in two weeks (a long time for me) and was enthralled in the novel from beginning to end. I highly recommend this book.