The Letters of Rosa Luxemburg

Though social media can irritate me at times, one of the benefits I find with its use is the conversations it can inspire about books. 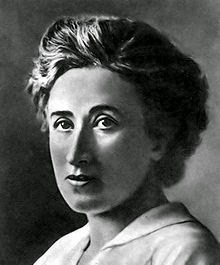 A few weeks ago, someone was asking about Rosa Luxemburg on a friend's site. Since I had written about Luxemburg in the past, I started thinking about her again and last week I picked up a copy of her letters put out by Verso Books.

The book is very interesting. There is some that's dull (the ins and outs of the various communist and socialist parties of Germany, France, Poland, Russia, etc.) but Luxemburg was such a humanist and her sympathies are so often with the working people she sees around her. She's an intellectual, no doubt, but it comes from a place of passion. The letters span European centres of influence: from Paris to Zurich, from Berlin to rural Poland, from Russia to Italy. Luxemburg truly was a vagabond...

It's easy to forget with hindsight and nearly 100 years of (corrupted) Communism, but Luxemburg simply wanted better lives for the mass of humanity that suffered terribly in the late 19th and early 20th centuries. Her collection of letters is one of those books that I keep next to bed and I read a few letters each night. She is such a good writer. When she's not pontificating on social class in Europe pre-WWI, she's focusing on nature and the birds she hears in her garden or the flowers that bloom in her window-sill.

Sometimes...it seems to me that I am not really a human being at all, but like a bird or a beast in human form. I feel so much more in the meadows when the grass is humming with bees than -- at one of our party congresses. I can say that to you, for you will not promptly suspect me of treason to socialism! You know that I really hope to die at my post, in a street fight or in prison...I seek refuge and find repose in nature.

She's rather forgotten today though I think I came to her work via a German artist who I love, Käthe Kollwitz. Kollwitz, a committed social activist herself, was a close friend of Karl Liebknecht, who was a close friend of Luxemburg's (and many letters in this collection are addressed to him). When Liebknecht (and Luxemburg) was kidnapped and murdered, Kollwitz dedicated much of her work to commemorating him and the causes he stood for.

Luxemburg, kidnapped, shot in the head and dumped into a canal in Berlin, fell out of fashion after her death at age 47. Hated by both Communists and capitalists, her political writings have mostly been untranslated (she wrote in Polish, German, and Russian) and this letter collection contains many letters translated for the first time. What I appreciate most about Luxemburg is her voice, the vast knowledge she had on so many topics. I love, too, the window her letters allow us into a 19th century woman as she went about her life, falling in love, battling with various editors and political agitators, suffering in prison, writing about nature, politics, love, and history. Also, despite the historical period, so much of her concerns, so much of what is happening politically mirrors our own concerns and politics today. From prison in 1917:

How I deplore the loss of all these months and years in which we might have had so many joyful hours together, notwithstanding all the horrors that are going on throughout the world. Do you know, the longer it lasts, and the more the infamy and monstrosity of the daily happenings surpasses all bounds, the more tranquil and more confident becomes my personal outlook...these are the only possible lines along which history can move, and we must follow the movement without losing sight of the main trend. I have the feeling that the moral filth through which we are wading, this huge madhouse in which we live, may all of a sudden, between one day and the next, be transformed into its very opposite, may become something stupendously great and heroic.