We Are Not Alone at the Segal Centre

I'm agnostic when it comes to UFOs. I don't believe in them but I don't disbelieve either. I've never seen a flying saucer or anything resembling one. If there are aliens or life forms on other planets, it has little to nothing to do with me so it rouses no extreme feelings whatsoever in me. 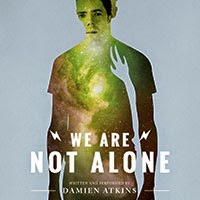 So when I was invited to Segal Centre's opening night of We Are Not Alone, I was a bit apprehensive because I didn't want to be preached to for 90 minutes by someone who passionately believes. The one man show, written and performed by Damien Atkins, starts out without much promise, I thought: a brief "history" of UFOs (albeit a very North America-centric version) in a few remarkable and noteworthy cases. He asserts that the evidence IS there and that it's not particularly controversial. That those who deny UFOs just need to do a little research. This isn't done stridently but with various character voices and personalities that he manages to bring to life though he's alone on that stage. Again, for someone who has no vested interested or emotional need to believe or disbelieve, this started to get to me. Nothing's worse than a work of art with "a message."

Then the play got better: Atkins set up an entire series of scenes where he visited a UFO conference in Phoenix, Arizona, with the play's director, to do research. This is where Atkins' skills as an actor really became apparent: how he could create such a rag-tag collections and freaks and geeks while being funny and evocative. He talks about the bizarre aspects, the belief (and need to believe) that many in this community inhabit. The new age-y links. The oddballs. The goofballs. The nutters. A scene about going out into Sedona in the Arizona desert to "tune" some vortex with two hilarious believers was hilarious but also moving. Though Atkins is no fan of this commodified part of the UFO industry, he still manages to see the humanity in his characters, even characters that are screwball, odd, out there, totally nuts.

In the end, he won me over: the story (of a guy writing a play about UFOs) won me over and I wanted more.

But what struck me most (and impressed me) was the fact that the Segal Centre even put this show on. As someone in charge of programming in a cultural organization, I know the eternal tightrope one has to walk in Montreal between giving people what they want and expect but also challenging people, trying new things, experimenting. And this play was certainly more of the latter. I admire, Lisa Rubin, Artistic Director at Segal, for giving it the green light. It's not a 100% successful play and I did feel that another actor on stage might have allowed for more depth and complexity (the actor playing the writer of the play and another actor playing the director of the play would have been wonderfully meta).

One thing about Montreal English theatre is that it's often too safe and takes few to no risks. It's something I think about: because the English community is older on average than the Francophone community (particularly devoted English theatre-goers), there is less of a tendency to challenge and it's much easier to just go with the safe choice, something that English theatre companies are definitely guilty of. So it's nice to see Segal Centre doing something a bit out of their comfort zone.

Whether this pays off and translates into box office is a different question.