Drago Jančar: The Tree With No Name

I was in Slovenia for work recently and a few people recommended Slovenian writer Drago Jančar to me. As we were heading out of Ljubljana and back to Trieste where we were staying, I picked up his novel, The Three With No Name along with a few other books.

I read the novel last week and found it wonderful: it's an interesting play on form but in a very readable and relatable way. The book starts in the thick of WWII when a man wakes up and isn't sure where he is or how he got there. He seems to have no past, or at least not one he shares with the reader, and he knocks on a window for help. 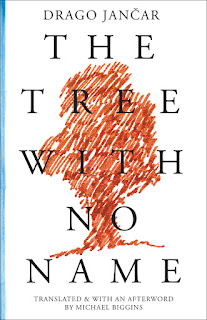 The story starts there, unrequited love for the village teacher, a soldier (her lover) shows up and threatens our narrator, but later befriends him. Then a battle ensues miles from the village.

But suddenly we are transported to the year 2000 in Ljubljana as an archivist sees a bike being pulled out of the river, obviously a very old bike. He thinks it could be the bike which belonged to the teacher in the village and it's here that we learn that this narrator, too, is the same character who 55 years earlier opens the book. Yet he's not the same narrator, too, as he hasn't aged.

Time shifts are slightly confusing but give us a real glimpse into how the past influences the present. The author, too, is fascinated with objects and the values that they are charged with, the ways in which they represent the people who used or loved them.

The book meanders between the past and the present (the year 2000) and as the archivist's marriage collapses under the weight of his discoveries and the ways it influences his mental state, we see a man, a nation, in crisis.

There are great riffs on everything from history to "truth," to the ugliness of base consumerism:

Bloated with dissatisfaction, with endless, relentless inner dissatisfaction that at one minute it tries to fill by racing from store to store, or that it stuffs into shopping bags and carts, that it shoves into the abyss of its own emptiness, amid this noise, in this over-stimulated, superficial shopping center life, where nothing remains, only the dissatisfaction that's been stuffed into bags, stuffed down gullets and bellies, into closets and drawers.

It's a really fascinating book and why Drago Jančar isn't better known in the West is a mystery to me.

The novel is part of an entire series that Dalkey Archive Press has been doing on Slovenian fiction, including poetry by Tomaž Šalamun, Marko Sosič and Andrej Blatnik, among many others.