from The Succubus by Vlado Žabot

Mainly, all this stuff in his head just made him feel restless, with a nightmarish feeling of being in a hurry, like flashes and sparks crackling above an unseen fire someone kept poking at, that flare up and down and mean absolutely nothing, nothing you could grasp or understand, since it was simply impossible for a person to find his way under such circumstances, since life and the city and everything else seemed both cheap and harrowing at the same time, since he didn't know how or with what or to what end he might sense of anything, since all of it was making him tremble, making him wish it would just over, one way or another. He had the feeling that all of it - bit by bit and at times distorted beyond recognition, from the street to the buildings to the people - was taking him over, all this rushing about, all these sounds from the television set, all this pointlessness, insignificance, worthlessness, which nevertheless demanded its daily meal every single day; all these appearances and guises, which were in fact forms of despair and bewilderment and confusion; and meanwhile maybe someone jumps or falls or screams, and of course it hardly mattered if one or another person died, if one or another person missed somebody or killed somebody, since all the while on television they just kept on doing what they do and no one was the wiser, neither here nor there nor anywhere. At that point, perhaps, it hardly mattered if you were this or that thing, if for instance you were a goat, or maybe an ant; it hardly mattered if you believed this thing or that thing or didn't believe it; what was important was that the daily meal was served and that nothing got muddled, that for instance all the cars and streetcars and trains didn't collide in one big pile-up, and that everything somehow seemed to run smoothly, so your wife could take her daily dose of tranquillizers and watch the different actors on television chase each other, cheat on each other, stab each other, or discuss healthy and unhealthy diets and diet supplements, which were part of the whole thing and had a positive influence on one's sense of well-being. And at the same time you begin to suspect that you are, in a little way, part of the whole thing and that in fact there is nothing else.

- from The Succubus by Vlado Žabot 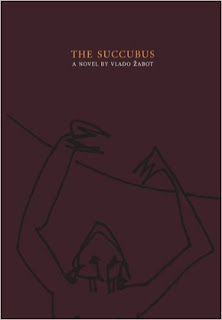