I'm just going to sing the praises of Centre Phi today. Because I recently moved from  the Plateau to Old Montreal, I had this impression at first (from everything those of us that live in the Plateau think) that Old Montreal was full of tourists and suburbanites looking for shitty pizza.

OK there are tourists and shitty pizza but in addition, there are amazing walkable streets, gorgeous moonlit nights along the river, the canal and, of course, Centre Phi.

This is exactly what the Plateau or Mile End or Park Ex is missing; a centre that presents all kinds of different art, cinema, concerts, exhibitions. Not everything is great but nearly everything is evocative and makes the mind wander, turn, consider, reflect. 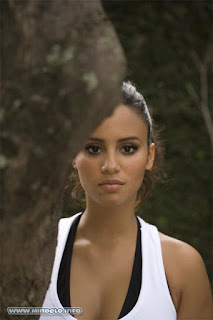 Two cases in point: Mayra Andrade, the Cape-Verdean singer, did a short set there the other night which was really amazing. The crowd, a few hundred people, were a mix of Francophone and Anglophone Quebecois, Caribbeans, Europeans and a mesh of all kinds of languages. Andrade herself spoke only in French but sang in French, English, Portuguese, Spanish and the Cape Verdean dialect. The singer was charming and terribly charmed by the crowd who adored her. It was one of those nights that made me love Montreal: its mix of cultures, its love of good music and art and an amazing crowd of people with beers in-hand just enjoying music from the other side of the world.

Then last night, the Centre Phi played an interesting American movie, The Midnight Swim. It was an odd little movie, about three sisters returning home after the mysterious disappearance and presumed death of their mother in a diving acccident. Hints of mental illness and something darker lurk behind the relationship each has with their mother and with each other and the point of view was done in an interesting if not wholly believable way. Not a perfect movie but an interesting one and the kind of experience you turn around in your head afterwards, trying to  make sense of certain images or scenes. The movie is beautifully filmed with shots that are absolutely mesmerizing in their beauty.

All month Centre Phi has film screenings, events on storytelling, in addition to talks/discussions on art, exhibitions, concerts and other things of interest.