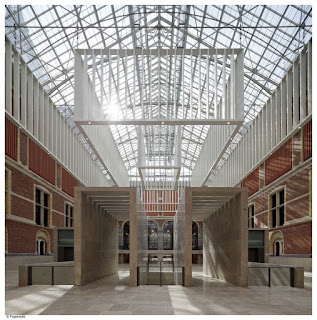 I saw this very interesting documentary last night, about the massive renovation of the Rijksmuseum in Amsterdam.

I knew very little about it so I went into it very vague about what the buzz was or even what the full scope of it was. I was almost immediately hooked.

It doesn't sound like it'd make that interesting a topic for a documentary: the ins and outs of city politics, planning officials, government officials, architects and museum staff as they go through a massive 10 year, 380 million Euro museum renovation. But the photography was so moving, the portraits of the individual staff members so compelling, the sense of the incredible bureaucracy of such a huge undertaking. 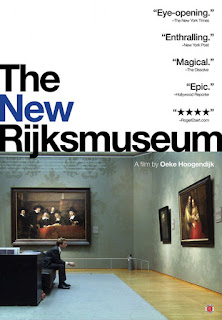 The love of the art is there, too: Rembrandt, Van Gogh, Japanese guard tower statues, Buddhas, Dutch Masters. You get a sense of Dutch society, too, the way people argue and negotiate work relationships, the varying personalities, the changes in staff (the Director quits halfway through the documentary and a new one is taken on, even though one of the other staff members hopes on camera that he'll be selected as the new Director).

Architecture takes front and centre stage and it really makes you see the complexity of creating public space for a specific public while still making other stakeholders happy (the head of the bicyclists' union is not portrayed particularly positively and this is a major them of the film, the battle against bicyclists).

It's a great film and plays the rest of the week at Cinema du Parc. By the end, when the museum opens anew, I almost teared up at the long effort and work that took place for all those years, getting the museum completed.