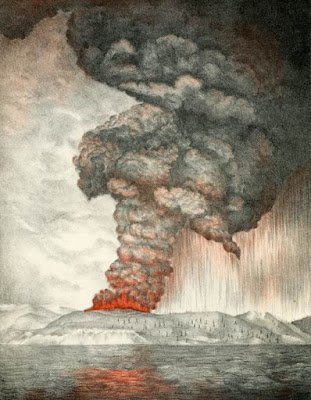 An interesting Mental Floss article here on 10 Facts about Krakatoa, the volcano that erupted in 1883 and caused massive destruction, killed 36,000+ people and affected weather patterns for a generation.

The blast was so loud, apparently, it could be heard more than 2,500 miles away.

Simon Winchester's 2005 book, Krakatoa: The Day the World Exploded, suggests that the eruption's
effects were so far-reaching, even contemporary Indonesian politics and society still haven't escaped the long shadow of the horrific eruption nearly 150 years later.

Oddly (I've heard this before), so much ash and so much gas was released into the atmosphere after the eruption, that sunsets were brilliant for years and years later, so much so that many have speculated that the sky in Edvard Munch's iconic painting, The Scream (first painted in 1893), shows evidence of the effects of the eruption in how the painter approached the vibrant reds and oranges in the sky.

One of the most fascinating parts of the book is the role that the Colonial Powers played in disseminating news of the tragedy around the world via the new fangled technological advance, the telegraph. There's racism here. There are heroes. There is tragedy and there is triumph.

Winchester's books are consistently readable, and the range of subjects that interests him is quite impressive: from the tale of the Oxford English Dictionary, about the birth of modern geology, and the history of the US.

Anyway, the Mental Floss article just reminded me about what a great book Winchester's book is and I pulled it down off the shelf and re-read most of it last night. Such a great read! 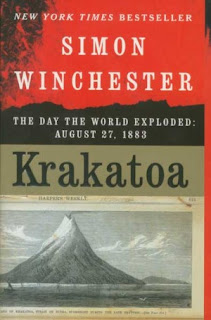