Now showing at Cinema du Parc, The Tribe is a 2014 Ukrainian film, written and directed by Myroslav Slaboshpytskiy. The film is set in a boarding school for deaf kids but a very violent and nearly adult-less school where a small time gang runs all kinds of scams or crimes, from pickpocketing to prostitution to mugging pensioners to running visa scams. 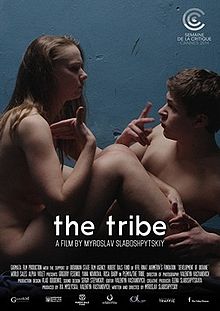 The intriguing thing about the movie is that there is no dialogue: the entire film is done in sign-language but that takes surprisingly little time to get adjusted to as an audience member. Yes, we miss details, but the story arc is clear and easy to follow. Filmed with entirely deaf actors, the complexity of the film shoot must have been overwhelming (see a really interesting Vice interview here with one of the stars of the film).

What a bleak, depressing and dog-eat-dog world. I've been thinking a lot about the notion of power, particularly in how we (as in The West) deal with Russia, and this notion of power, physical power, being the end all beat all of respectability is one that isn't prominent in our law-based society. This thought came about because of an article I read a while back about what we don't understand about dealing with Putin, that power and how he holds on to power, is of deadly importance to him and explains all this visual imagery that is so key for him to maintain this reputation for being a strong man.  Obviously, the way we think about power is complex. But it seems to me that we approach power in a more subtle way in North America: power comes not just from brute strength but also from smarts, street smarts, intelligence and being one step ahead of one's enemy. But here power is open-faced, bloody, raw. There is no question that he who has the power is the one at the top and there is no room for things like diplomacy, intellectualism, or even just outmaneuvering one's enemy.

This is an almost operatic kind of tale, love, pain, betrayal, and murder. And there is no spoken dialogue. Quite an unusual cinematic experience on the whole. The critical reviews have been very solid, people comparing it to The Godfather and reacting to the fact that there are these long takes with very little cutting.

I have to say that this film is one that stays with you; I'm already replaying certain scenes in my mind, trying to work them out, wondering what the director was trying to do and, more importantly, how he did it.

Definitely worth seeing (I was surprised that there were so many people there) but don't see it if you're on the verge of feeling depressed or bleak. It's a dark and angry film though it's fascinating.

The Tribe plays this week and next at Cinema du Parc.