The prize is announced tomorrow which allows me to get one more pick in for the prize. I love Samuel Archibald's collection, Arvida. 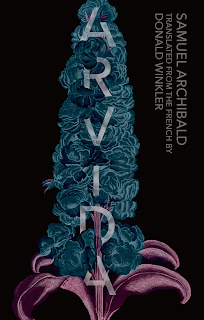 It's unusual for the Giller to short-list a collection of stories and even more unusual to select a translation of short stories but Archibald's collection is so innovative and interesting that it's no surprise people have been raving about it.

Set in the real life town of Arvida in the Saguenay region of Quebec, the stories are loaded with rag-tag characters: criminals, chancers, posers, losers and clowns.

One story is a road-trip across Canada as three delinquents try to sneak a woman into the US. Another story echoes Faulkner and tells the story of a lonely woman whose husband has moved to Montreal to make his fortune while she waits for his return in a creaky old family home. She never doubts that he'll come back though everyone in the town is convinced he's abandoned her. This story contains some of the most beautiful writing I've encountered in French to English translation (translator Donald Winkler won the Governor General's Award for the translation of this work and it's obvious when reading this why Winkler is one of the most sought-after translators working today).

The greatest thing about short-stories is keeping them on the nightstand and reading one each night before sleep, those ditties roll around in your dreams and are there when you wake up with the sun.

I don't know if Arvida will win the prize (I'm terrible at predicting it) but stay tuned tomorrow for the big reveal.