I think it's too late to see it in theatres, but maybe it'll be available on DVD soon, this film really blew me away. I saw it a few nights ago at Cinema du Parc and I do have to admit, that I have a particular fondness for Brazil films. I don't know why exactly since I've never been to Brazil nor do I speak Portuguese (I also like Brazilian writers), but I suppose it has to do with the vast differences between a country like Brazil and Canada (the heat, the chaos of it, the warmth of the people). 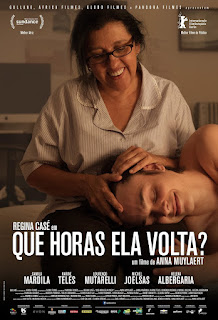 This film tells the story of a wealthy family and their maid, Val, in Sao Paolo and what happens when the maid's daughter, Jessica, comes from the north to stay with her mother before she takes the entrance exams at university.

The contrasts of class are stark and it takes the daughter's presence to make them apparent: her mother is outraged that Jessica refuses to know her place as the maid's daughter, in this kind of class limbo-land, asking to sleep in the guest room, letting the teenagers drag her into the pool. The wealthy wife, too, recognizes the class distinctions and wants to maintain them but she also sees the fact that her husband is very attracted to Val's young beautiful and very intelligent daughter. A complicated arrangement results and is even further complicated by the relationship between Jessica and the teenaged son of the family.

The film exposes the lie that domestic servants are "part of the family" as they aren't, really, and it takes someone shaking up the strict protocol that is so present in this kind of relationship for everyone to feel ruffled, uncomfortable, out of sorts. Oddly, it's the men in the family who don't seem to be so affected by the class rifts, but there's also sexual attraction there to circumvent those distinctions. Sex trumps all.

It's a really lovely film, full of sensuality and pain, but also hopeful, ending in the way we all hope it ends. I somehow managed to miss the entire Montreal Brazil Film Festival this year (where was I?!) which is unfortunate because last year I saw an incredible Brazilian film there (based on a Stefan Zweig short story). Here's to hoping that Cinema du Parc will continue to show Brazilian films.

On a related note, very sad to see that Cinema Excentris has closed. Apparently it's a temporary closure but we need more repertory cinemas in this city. There's no shortage of film festivals but it's so important to have cinemas that are devoted to less huge films, and more art-house or foreign films. It's sad to see how the film world has become so concentrated on huge blockbusters and there is so little room left for other kinds of film.