1) The opening of the film Manhattan - that horn-blowing chord progression which announces the opening bars of the song "Manhattan" - is iconic. But I never think of Woody Allen when I hear that song. I think of Ella Fitzgerald or Blossom Dearie. 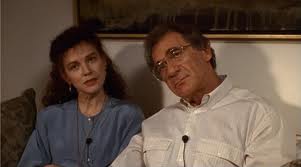 2) I've seen Husbands and Wives so many times there are scenes I can practically recite by heart. Sydney Pollack is such a lovable cad. And Judy Davis' character is so neurotic, really the standard "Woody Allen" character turned around (with added viciousness).

3) I remember being in my early teens when my mom and aunt returned from seeing Hannah and Her Sisters and complaining that it was one of the most boring films they'd ever seen. This prejudiced me for years against that film but when I finally did see it in my late twenties (on a pirated DVD in Shanghai), I thought it was really wonderful. And who can hate anything that has Dianne Wiest in it?

4) Paris at Midnight got great reviews and I have some friends who love it. Me: meh. Definitely one of his weaker films in my view. Hackneyed cliched 'writerly' writers and the girlfriend has absolutely no redeeming qualities whatsoever. Plus Owen Wilson pffffft. And the nice little moral which he practically assaults us with at the end. Please. Don't preach, Woody. 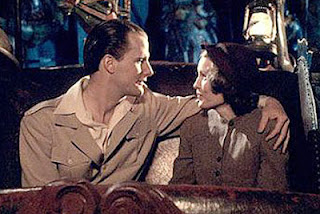 5) The Purple Rose of Cairo is about dreaming when you're not a kid anymore.

6) One of his most underrated films is Alice: with Joe Mantegna (the loveable bear who loves Edna St-Vincent-Millay) and William Hurt (a big New York type prick). Plus turning invisible and listening in on an ex's therapy session: cinematic gold.

7) Manhattan Murder Mystery is about marriage (duh) but the focus is off somewhat so it becomes about murder. It's not really about murder, one has to keep reminding oneself. Even the director seems to forget it at certain points. The imagery of the city always watching, of always having witnesses, of never really being alone is both creepy and comforting. Anjelica Huston is such a smooth operator: as a kid, I wanted her to be my mother (an exotic writer with a facade of never-ending confidence). Now I'd want to be her best friend.

8) Dianne Wiest's character in Bullets Over Broadway can make me laugh so hard, tears can well up in my eyes ("Don't speak!") and John Cusack plays that role with the perfect blend of naivete and deception. Plus Jennifer Tilly is spot on.

9) I love Annie Hall  but feel the scenes in Los Angeles are inauthentic and over-reliant on a New Yorker's shallow conception of life out west. Also, though I like the film, I'm not very sure I like the character Annie Hall. How can Diane Keaton play her so ridden with neuroses but then play Carol (so ready for a dangerous adventure) from Manhattan Murder Mystery so convincingly? A good actress... 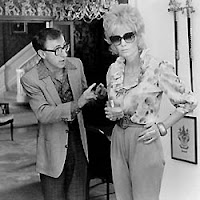