Wordstock was great! One reason I wanted to attend was to see the book fair aspect of it, a balance between literary events and publishers presenting their new catalogs. 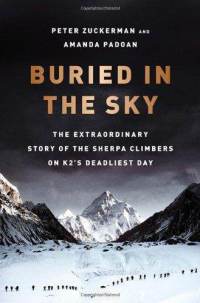 Saw Peter Zuckerman talk about his book Buried in the Sky about the individual Sherpa trekkers who have been such integral partners in the development of the trekking `industry` in Nepal. He`s a compelling storyteller, too, and the audience was on the edges of their seats this afternoon as he told anecdotes from the book.

I then talked to people from several western presses and magazines and met some really great people.

Also saw Daniel H. Wilson in discussion and his book could be a real gem, as well. Haven`t read it but it seems interesting. Read a summary of it here.

Made it over to Powell`s and bought Jenny Erpenbeck`s Visitation, an Alison Bechdel anthology, and Ruth Stone`s In the Next Galaxy.

But the best news: got an email confirming our 2013 grand prize winner. It`s a great one, folks, and stay tuned until our press conference in March, 2013 where will announce this, some other exciting confirmed guests and exciting news about our upcoming Festival.

For those who don`t know yet: the 2013 Festival is scheduled for April 22nd until 28th at the OPUS Hotel.