I`m an idiot. But sometimes being an idiot can have certain benefits.

I had a ticket to Marilynne Robinson and Nathan Englander`s show on FAITH as part of the New Yorker Festival. I got into the right lane for theatre two (I was a bit late though the show hadn`t started), rushed into the nearly packed theatre and found a seat. Five minutes later the show began. All men entered and walked up on stage, five men. I had gone into the wrong theatre but there was no way I was going to get up and cause a major spectacle in order to get out and into the right theatre. So I shrugged and leaned into my seat. 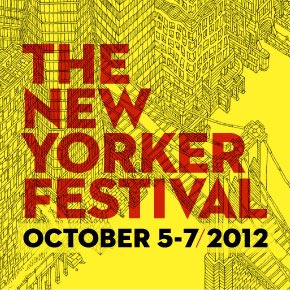 Three of these writers have work I know very well. One less so though I`ve heard his name. So suddenly I felt it was synchronicity.

(Sidebar: I had tried to get tickets to this show initially while in Berlin but was told it was oversold and there were no tickets available. I sure hope I didn`t cause anyone to miss out!)

Great conversation: about the city as character, about the importance of cities in modern fiction (and journalism), about city life vs. pastoral life (particularly in a modern text since, as Willing Davidson, the moderator, suggested, there are few examples of modern pastoral novels from the last 30-40 years.

The biggest surprise was running into someone I wasn`t expecting to in the theatre later and getting confirmation that they are coming to our Festival in 2013! Someone I`ve been working on for a while who formally told me that they are in! Yes! Can`t say who it is and won`t be releasing any names until March, 2013, but it`s a good one, I promise...

It`s a shame I missed Marilynne Robinson and Nathan Englander! Damn! I was looking forward to hearing them. But, hey, good show anyway.