There is no shortage of literary prizes out there (including Blue Met's two best-known prizes, the Blue Met Grand Prize and the Arab Prize) but one prize that I pay close attention to each year is the Man Asian Literary Prize.

It's an odd prize in many ways because though it represents a huge area (1/3 of the world's population or something) with a vast number of languages, it recognizes work either written in or translated into English. The countries represented vary, as well: from Afghanistan to Hong Kong to Japan to Turkey to Vietnam, 34 in total. 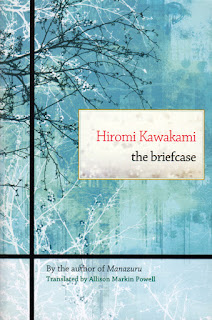 The prize is only 5-6 years old and has already had a bumpy ride, though they certainly have chosen some fascinating works over its short life. After this year, the sponsoring organization, The Man Group, will move on, leaving the prize to find a new sponsor. Not an easy feat, I am sure...

Some really fascinating works as part of its 2012 long list:

and, of course, Kim Thuy's Ru.

And this is just a short sampling of the long list. I really like this prize and I think it's necessary since so many prizes are based in the West with a handful of works nominated for several awards. I am also a big fan of promoting non-Western literature and that there is a translation component to it as well.

I've not read all the work on the long-list but I am a big fan of Kawakami (and have written about her before) whose work is lyrical and meditative, and Tie Ning has done some interesting work, too (he's been writing for 30 years). Naturally, I love Ru as well... and the Malaysian writer's work has been on my radar since the fall (though I've not read it yet).

The short list will be announced Wednesday, January 9 at 6pm in Hong Kong. Really hoping Kim Thuy, Kawakami and Ning's work all make it through to the short-list.
Posted by Gregory McCormick at 1/08/2013 08:25:00 AM