Thirtysomething and Our Lost Principles

Since the summer, I've been slowly watching old thirtysomething episodes that I bought on iTunes, a show I was too young for when it aired on TV in the late 80s. I remember that I did watch it, at least for a while, but I could remember almost nothing about it.

Not sure why I decided to watch it in the first place but part of it is remembering all the buzz which surrounded the show when it first came out and wanting to revisit it to see how well it's stood up to the passing of time. What strikes me about the show now is how so much of the angst that people in their 30s had then has just disappeared. Not that angst has disappeared but the specific fears and pathologies that people (and society) have now are radically different. 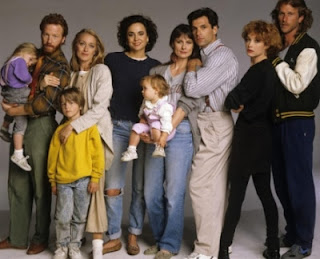 For those not familiar with the show, it portrays a married couple (Michael and Hope) and their small group of friends (another married couple, Nancy and Elliot), and three single friends (Melissa, Gary and Ellen) in the Philadelphia of the late 80s. It's not a show with exciting action or overly dramatic plot-lines (at least not in its first season): it simply traces the ups and downs of middle class life, of marriage squabbles and problems, of dating life, of careers. This is done with scenes of two or more people sitting and talking. The show is really a series of conversations and there are rarely even new characters introduced.

In 2012, I am roughly the same age as the characters were in the late 80s, though the characters at the time were roughly the same age as my parents (in their 30s at the time). In many ways, the show is dated: the roles of men and women are not questioned in the same way now that they were then. So much is just taken for granted now in terms of women and careers and family life.

But what is refreshing to me when watching it how real it is in many ways: how they struggle with money but do so in a real way. It's not like TV now where everyone lives in gorgeous apartments in big cities and dresses in Gucci and Paul Smith but complains that they don't have money or can't afford to do something. Hope and Michael's house is always unfinished, they argue about money, about things they can't do because they can't afford it. Not having money has consequences, in other words.

Though it seems like a small thing, this money issue, in many ways it gets at the core of a different set of values that we have lost: one of the central themes of the show is the fear of "selling out," of losing (or having lost) one's integrity, of holding on to one's principles at a time when it isn't easy to do so. Gary doesn't want to buy into the politics of his university just to get tenure. Michael doesn't want to go after the big overly capitalist firms (he runs a small advertising agency) because they have no principles. Having money isn't the thing which motivates these characters. And that might on the surface seem pat and even trite, but the reality is that they don't have money and it seems like it (a disconnect that is very common in portrayals of modern life: people live like rich people and dress like rich people even if they drive a bus in New York City are supposedly "working class"). Maybe I'm reading too much into this, but to me this has to do with the fact that the middle class then was bigger than it is now, so the fears of selling out was a real concern: rich people had less integrity, fewer principles, were greedy.

More than this is the central struggle between pursuing one's creative pursuits and being forced to making a living in the real world. All the characters have moments when they realize that, in their 30s, they are no longer able to dream of their futures in the same way. This struck me in a recent episode when Ellen said, "I realize that I can't keep living for some idea of how my life will be one day in the future. I have to accept that this is my life now with all its flaws and drawbacks."

Today, money seems to be answer, money and fame: not only is it a sign of success, it IS success. It seems to me (in large measure) that qualities like integrity are almost quaint (has anyone else seen that car ad using Fun's song "We Are Young"? Remember when that would have been absolutely appalling: that a band sold their song to a car company just months after it was a hit? But it seems that no one has qualms any more about this kind of "selling out." It's money, right?!). Sigh, maybe I'm just getting old...

But I digress: No, thirtysomething isn't perfect. It's dated at times, the characters can seem pretty self-indulgent and whiny. They are certainly middle class people with middle class problems (and, geez, every single person that ever crosses that camera is whitewhitewhite).

But perhaps because I am a similar time in my life (not quite middle aged but not young anymore) I can relate to these characters' experiences, worries, fears, and successes. And I've been enjoying watching it (slowly). If I do move on to season 2, it'll be in a while (I watch a lot more TV and movies in the winter) but I hope it continues to present interesting shifts in our cultures to think about...
Posted by Gregory McCormick at 1/29/2013 08:35:00 AM