This small novel, The Red Collar by Jean-Christophe Rufin (translation of Le collier rouge) was a great little book. Had a very busy week so I wasn't swimming in free time, but I did manage to crank it out in a couple of evenings. Had it been a summer day, I could have read it in a single sitting most likely.

Set in a small town in France immediately at the end of WWI, the book opens with a jailer reflecting on the oppressive summer heat and the young soldier he has imprisoned deep inside the jail where it's cooler and danker.

When the commanding officer arrives to interrogate the prisoner, the point of view shifts suddenly and we are in Lantier's head for the rest of the novel. He is tasked with getting the "whole story" from the prisoner, a local man who'd been feted as a war hero but then almost immediately locked up after for a capital offense.

There is a young beautiful woman, a child, a village full of those who feel the young man has received a rotten deal. It's Lantier's decision to decide his fate: firing squad? Long prison term? Release?

In the midst of all this a dog sits in the town square barking incessantly: the prisoner's dog who has refused to leave his side throughout the war and even during his imprisonment. The dog is the key to the entire tale. 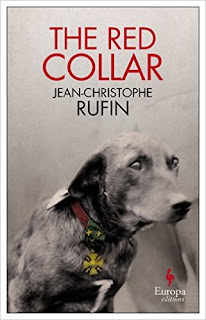 I won't go into detail about where the story goes or what the crime is that the man is accused of. It would spoil the story, but it was an interesting and engaging read, this novel. The language describing the natural scenery around the town is lovely as is the atmosphere that Rufin creates of life in this small provincial town.

In typical fashion for much contemporary French literature, the commander has a rather patronizing if not disdainful view of the locals and this in one way reflects the time and place and the stark class divisions that were such a part of French society. But it also is a convenient way to write a novel for contemporary middle and upper class French people without having to explore issues of class (something French novelists rarely seem interested in though I would argue that France as a whole is kind of secretly obsessed with ignoring how class operates in contemporary French society).

This book is something of a departure for Rufin whose books tend to be long and unwieldy, if full of interesting views of France in history.

Lots of Anglo readers tell me that they have little interest in contemporary French literature but that's a mistake. The thing about many contemporary French novelists is that they tell good stories and the idea that French literature is chock full of "novels of ideas" or writers who only seem to want to experiment with form or write highly symbolic treatises is rather passe (though not completely so).  Rufin does use symbolism at times in a rather high-handed way, but the fact that he can tell an engaging story mitigates this, I find. French writers are often very interested, too, in the rest of the world (Rufin himself has written books set or partly set in Cairo and Brazil, among other other places).