Documentary last night here at Festival Letteratura on the life and work of Susan Sontag was interesting. A few people I know said it felt a bit too much focused on her love life but I thought it struck a nice balance between her work and her life. After all, not much was known about her life while she was alive. So it’s a good chance to learn more. She was a fascinating character in so many ways.

I know many academics poo-pooed much of her work though I honestly believe this came from jealousy: she was one of the rare intellectuals that didn’t have to rely on the university system in order to work and be a voice and be relevant. Name any other public intellectual in the last 50 years who can claim that (French writers excluded since this tradition has existed widely in parts of Europe for a long time). Yes, she was highly inspired by Roland Barthes but inspiration is the bread and butter of most writers...(plus her essay Against Interpretation pretty much dismissed entire careers of academics whose life work had been built on precisely building, enhancing and creating a world for interpretation). 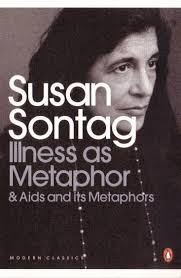 Personally, I encountered her work in the early/mid 90s when I read Illness as Metaphor and AIDS and its Metaphors. I don’t remember why I read this or how I came across it, but I have such a strong memory of being in a bathtub while my roommate pounded on the door, telling me to get out because I’d been in there so long. But I just couldn’t put this book down. I was only around 21 or 22 but her work at that time opened so much of the world to me, things I never knew about, thought about. The premise of this double work (the first volume of which came after her own cancer diagnosis in the late 70s; the second volume came around in the late 80s in reaction to the AIDS crisis) is simple in hindsight: we attach meaning and metaphor to illness. But cancer, AIDS, other illnesses are not metaphors and this kind of thinking is dangerous and unfair (and damaging). She starts with cancer and all the things I remember hearing about it growing up: that too much stress is the cause, that type A personalities suffer more often from it, etc. She breaks all that apart by comparing the reaction of society to TB which also had all kinds of social beliefs and metaphors attached to it. And the obvious way that society attacked AIDS sufferers and attached all kinds of stigmas to their disease. 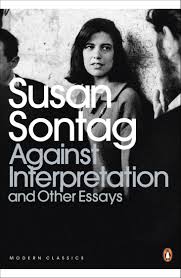 After I read this work, I was off: I, etcetera was a collection of “short stories” (though somehow that feels like a limiting term when one really knows this work) considers the life that her parents had, living in China in the 1930s and there is more personal here than in many of her works. Her earlier works on French New Wave cinema (something I had no idea about: I honestly thought New Wave had something to do with all the “waver” haircuts on people in high-school…I guess indirectly it did), on photography, on fascism and, of course, on “Camp” (the term of which she practically invented or at minimum made mainstream). I do believe I read just about everything she published with the thrill and excitement that a young person feels when discovering the world for the first time.

When she wrote that piece for the New Yorker in the weeks after 9/11 I felt fiercely protective of her and all the attacks on her (which were unfair; she had only suggested that we can't understand 9/11 unless we have a bit of historical memory and understand the source of much of the Middle East's rage at the West and the US particular: nothing particularly revolutionary in that). So far to the right had the US slanted by then that even this relatively tepid article landed her in hot water (she seemed oddly defensive to me). It's even more slanted to the right by now.

I never could get into her novels. In America I managed to finish but with effort. The documentary also shows us that she had a difficult side, was ego-tistical, was terrified of death. This was all very eye-opening for me only have known her very public side.

I suppose that she was a creature of her time and place. High culture was falling apart and merging with low culture into what we call today pop culture. There was as a place publicly for someone who could write about Kant and Mussolini and then about Invasion of the Body Snatchers. She was present in the culture, she was a personality and had a voice.

Yes, she died over 10 years ago but I do sometimes wonder what she would think of the way our society is now: the world of Facebook or selfies, the refugee crisis in Europe. The world is a much starker place without her intelligence and insight...
Posted by Gregory McCormick at 9/12/2015 07:21:00 AM