Paul Bowles was one of the first writers I was kind of obsessed with as a young man. I first discovered him after seeing the movie The Sheltering Sky and then reading the book immediately after. The film is dull but still has interesting things in it but the book was a revelation to me. It was complex, beautiful, horrifying, and painful. It tells the story of a married couple, traversing across Northern Africa in the late 1940s and the breakdown of their marriage, illness and mental instability.

It's one of those books I re-read every few years and I still love it intensely.

I've read just about all of Bowles' other works, too: The Spider's House, Let It Come Down and, of course, his short stories (his collection The Delicate Prey is phenomenal).

His wife's novel, too, Two Serious Ladies, is another really amazing novel that I've read and re-read several times over the years. It has a different kind of complexity to Paul Bowles: the style and tone are almost bizarre and she has a sense of humour in a way that is not immediately accessible in her husband's work. 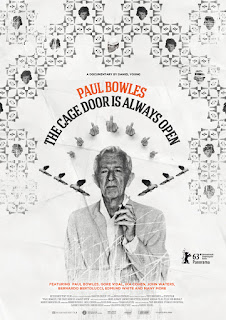 So when I saw that Festival Letteratura was playing this documentary, Paul Bowles: The Cage Door is Always Open, I was first in line.

The documentary got tepidly positive reviews though with many qualifications. In one way that mattered almost not at all since I tend to want to make up my own mind about a piece of art. But I went in skeptical...

The film is worth seeing, especially if one is interested in Paul Bowles' work, in Jane Bowles' work, or in the host of other writers that make appearances: William Burroughs, Truman Capote, Gore Vidal, Jack Kerouac, among many others.

Born in New York, Bowles traveled Europe in the 1920s and 30s (he was a great darling of Gertrude Stein's set in Paris), then returned to the US, married Jane, and spent much of the war there and in Mexico. He then returned to Tangiers in Morocco where he lived the rest of his life, holding court there with some of the most famous writers and personalities of his day.

The film is highly biographical and focuses as much on Bowles' music as his writing (he was a prolific composer before he turned to fiction). I wish there'd been more about his writing, in fact. The only work which was really explored in detail was The Sheltering Sky which is, no doubt, his best work. But it would have been nice to have more about his development as an artist, as a writer. There is a bit about Jane Bowles' work, as well, though the film is very much about him (she wrote very little and died in mental asylum in Spain in the early 1970s). We also learn about his very valiant attempts at recording Moroccan tribal music and writing down oral histories and tales of Moroccan rural life.

Critics said that the film lacked a unified voice and that there wasn't a strong enough perspective to hold it all together. But one thing that emerged for me was just how messed up Bowles, and particularly Jane Bowles, was. The drinking, the drugs, the alienation from society and oneself.

Lots of talking heads interspersed with crazy Bowles-inspired animations that are visually interesting (though border on irritating at times).

But I love that the filmmaker used so much of Bowles' music in the film.